Implantable pacemakers and implantable cardioverter-defibrillators (ICDs) are designed to include a “magnet mode” feature. This feature is designed to be used when a patient is undergoing a procedure where electromagnetic interference (EMI) is possible, or (for ICDs) any time suspension of tachycardia detection and therapy is needed. Magnet mode in a pacemaker is used to force asynchronous pacing and gain control of inappropriate tracking or rate response operation. Magnet mode in an ICD can disable tachycardia detections but does not generally affect pacing functionality. A simple doughnut magnet, of approximately 90 gauss (G) strength, is the standard for triggering the magnet mode feature.

However, this feature is also susceptible to being triggered from any strong static magnetic field. Historically, magnets that are strong enough to trigger magnet mode in a pacemaker or ICD were very large or identifiable (e.g., stereo speakers, electric motors in cordless tools). Pacemaker patients were relatively unaffected from these magnets by maintaining some separation distance since the static magnetic field decays exponentially with distance.

However, with the proliferation of small rare-earth magnets (e.g., neodymium), the environment is changing. These magnets are small enough to be and are being increasingly used inside of headphones, locks for doors, and small phone speakers, as well as emerging technologies including e-cigarettes and smart watches (and accessories).

For example, the MagSafe feature in the iPhone 12 series of phones uses a strong rare-earth magnet to align the phone for wireless charging. A publication in Heart Rhythm demonstrates an iPhone 12 triggering the magnet mode of a Medtronic ICD.

While the iPhone 12 is just another application with a strong magnet, it is a concern for patients because the phone can get very close to the implantable device (e.g., placing the phone in a front shirt or jacket pocket). ICDs in magnet mode will not deliver lifesaving shocks or antitachycardia pacing therapy, which can be life-threatening to the patient if a dangerous abnormal heart rhythm were to occur. Patients might hear an electronic tone indicating that the device is entering magnet mode, depending on the ICD make and model. When a pacemaker enters magnet mode, the device continuously paces without sensing the patient’s own heart rhythm, which can result in symptoms (such as irregular heartbeats), abnormal heart rhythms, or, rarely, more serious patient harm. Implantable pacemakers and ICDs often include a warning to keep phones at least 6 inches away from the implanted medical device. Following Greenberg et al, Apple published a notice on its website also cautioning users to keep phones at least 6 inches away from the implanted medical device.

The measurement was made using an FW Bell 5180 Gauss Meter with STD18-0404 Transverse probe (unidirectional probe) (OECO LLC, Portland, OR). The probe was zeroed at the beginning of measurement using zero gauss chamber. The noise floor after zeroing was between 0 and -0.6 G. The Speag DASY52 NEO system (SPEAG, Zurich, Switzerland) was used for accurate and repeatable positioning of the probe.

The phones and watches were placed screen face down on a nonconductive surface. For the Apple Watch 6, an additional measurement was made with the watch placed screen face up (see Figure 1). The transverse probe measured X, Y, and Z components of the static magnetic field (see Figure 2). Measurements for each phone were made at 1 cm resolution in a series of XY planes over each phone. All measurements for the Apple Watch 6 were made with 5 mm resolution. The XY measurement planes were at 1, 11, 21, and 31 mm above the top surface of the phones and watches (e.g., camera for iPhones). For the iPhone 12 Pro Max Model, an additional measurement was made at 1 mm above the surface of the main body (excluding camera side of the phone).

Table 1: Maximum static magnetic field measured for Z-component for each phone and watch at each measurement plane (in gauss) 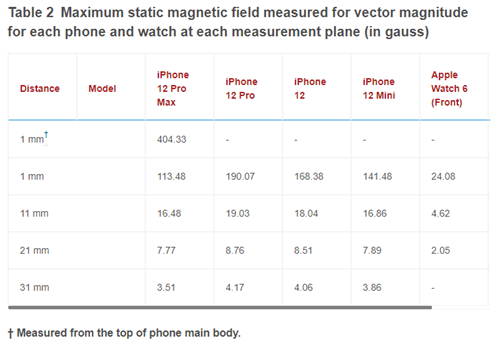 Table 2: Maximum static magnetic field measured for vector magnitude for each phone and watch at each measurement plane (in gauss) 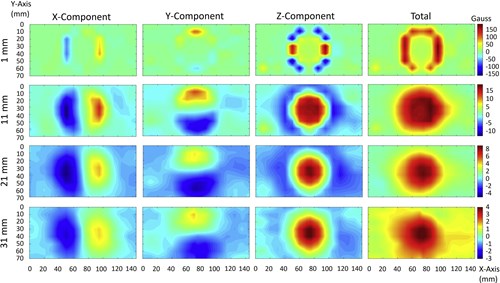 The magnetic field distribution changes rapidly close to the magnet, so a smaller measurement resolution could result in a higher maximum static magnetic field, especially at 1 mm separation distance.

This study was primarily aimed at determining the static magnetic field strength coming from iPhone 12 models and an Apple Watch 6 and comparing that to the levels that trigger magnet mode in implantable pacemakers and ICDs. The measurement data presented can be used to determine if other medical devices susceptible to strong static magnetic fields are affected (e.g., neurostimulators with magnet modes, infusion pumps, cochlear implants).

All iPhone 12 and Apple Watch 6 models tested have static magnetic fields significantly greater than 10 G in close proximity (1–11 mm), which attenuates to below 10 G between 11 and 20 mm. If placed within close proximity, the fields are high enough to place implanted cardiac devices into magnet mode. When a separation distance of 6 inches is maintained between an iPhone 12 (or Apple Watch 6), the implantable device should not be put into magnet mode.

People with implanted medical devices may want to take some simple precautions, including:

The findings of this study support the FDA recommendation that patients keep any consumer electronic devices that may create magnetic interference, including cell phones and smart watches, at least 6 inches away from implanted medical devices, in particular pacemakers and cardiac defibrillators.