How and why NASA conducts acoustic testing

For our October issue of the magazine, CET&D spoke to NASA about the key role anechoic chambers play in the acoustic testing of its aerospace technologies.

The interview, which appears in full below, was with Randolph Cabell, flight acoustics team lead at NASA’s Langley Research Center.

The conversation with Cabell was part of a feature looking at anechoic chambers throughout the world. The magazine article, which also features interviews with Gore, UL Solutions and Orfield Labs, is available to read here.

CET&D: How many anechoic chambers does NASA have, where are they located and how long have they existed?

Cabell: There are many facilities at NASA with walls, floors, and ceilings that have been treated to some degree with an acoustically absorptive material to minimize reflected sound. A few examples at NASA Langley include the Quiet Flow Facility, the Low Speed Aeroacoustic Wind Tunnel, the Structural Acoustic Loads and Transmission facility, the Small Hover Anechoic Chamber, and the Small Anechoic chamber.

Other NASA centers have facilities treated in a similar way but adapted to a specific acoustical application, such as jet noise or space station noise. Although some of these facilities are more than 50 years old, they have all been modified or enhanced over the past few decades to adapt to the changing needs of the aerospace industry, which makes it difficult to state a specific time of existence. One facility that is unchanged since its original construction is the Small Anechoic Chamber at NASA Langley, which was constructed in 1974.

CET&D: Can you describe to me why they are so important in your work?

Cabell: Anechoic treatment is usually added to a facility to improve the quality of measurements made when studying the sound radiation characteristics of a sound source. This gives researchers greater confidence that the sound being measured is coming directly from the source being studied without interference from sound reflected from nearby structures (such as walls, floors, or ceilings). 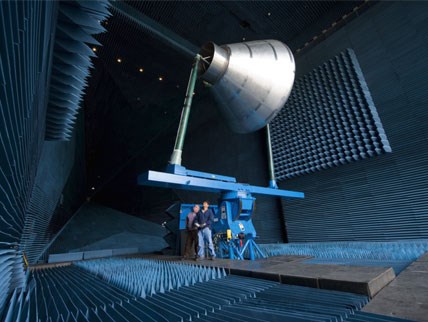 CET&D: Can you give me an example of a NASA technology for which testing in the anechoic chamber was an essential part of its development?

Cabell: Aerospace technologies often have acoustic design objectives that are tightly coupled with other design objectives such as aerodynamic or engine performance.  Therefore, many facilities include capabilities to measure, sometimes simultaneously, acoustic and performance parameters. Examples of technologies where measurements in an acoustically treated facility were an important part of the development process include:

CET&D: Are your anechoic chambers only used for in-house testing or do you allow other organizations to use them? If you do, what type of organizations would these be?

Cabell: Most tests in our acoustically treated facilities support NASA (in-house) programs and projects. The nature of that work often involves partnerships with universities, other federal agencies, and private industry. Outside organizations are allowed to test in NASA facilities on a fee for service basis if the test requires a capability that is unique to a NASA facility not available in a commercial acoustical testing lab and if that work is complementary to work being performed in NASA programs and projects.

CET&D: Do you only use the chambers for acoustic testing or do you also do EMC testing?

Cabell: Although treatment to absorb sound and electromagnetic waves looks similar, the material properties needed to absorb energy are different for the two types of waves. This makes it impractical to design a single room for both acoustic and radio frequency testing. There are facilities at NASA that are specifically designed for electromagnetic testing, for example to measure the performance of antennas used to transmit information from distant spacecraft.

CET&D: What's the most interesting thing that you can tell me about your anechoic chambers?

Cabell: Some people find the experience of being in a very quiet room (like an anechoic chamber) disconcerting, describing it as painful to their ears.